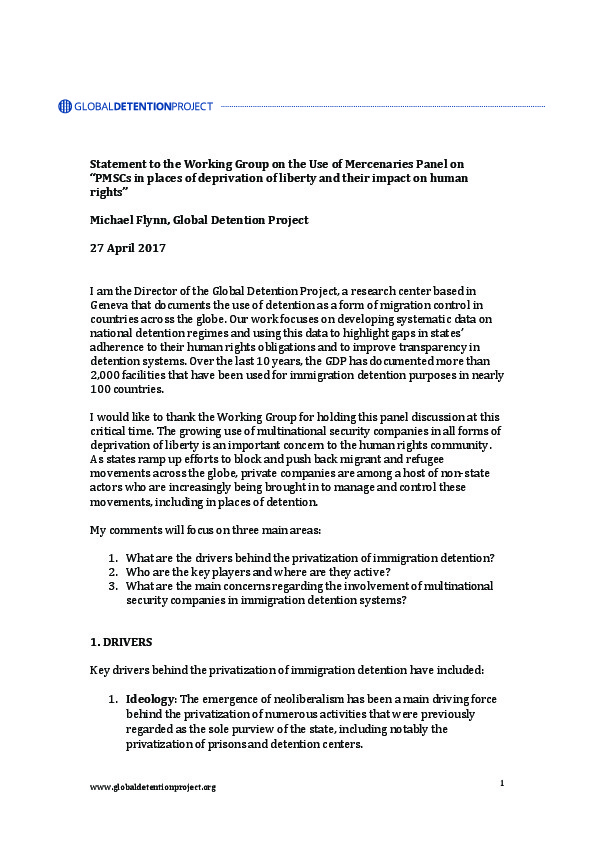 I am the Director of the Global Detention Project, a research center based in Geneva that documents the use of detention as a form of migration control in countries across the globe. Our work focuses on developing systematic data on national detention regimes and using this data to highlight gaps in states’ adherence to their human rights obligations and to improve transparency in detention systems. Over the last 10 years, the GDP has documented more than 2,000 facilities that have been used for immigration detention purposes in nearly 100 countries.

I would like to thank the Working Group for holding this panel discussion at this critical time. The growing use of multinational security companies in all forms of deprivation of liberty is an important concern to the human rights community. As states ramp up efforts to block and push back migrant and refugee movements across the globe, private companies are among a host of non-state actors who are increasingly being brought in to manage and control these movements, including in places of detention.

My comments will focus on three main areas:

Key drivers behind the privatization of immigration detention have included:

A number of recent studies reveal that in countries across Europe and elsewhere there are a growing number of private actors involved in managing migrants and refugees in detention.[1] However, when we narrow the scope of our analysis to multinational corporations operating inside dedicated immigration detention centers—and not, for instance in criminal prisons that are used for immigration purposes—we see that to date the phenomenon of the privatization of immigration detention remains largely concentrated among a few companies operating in a small handful of countries.

More recently, privatization of immigration detention operations has expanded to several other European countries, including Italy, France, Austria, and the Netherlands.

Among the better-known corporations involved in immigration detention operations are (see the annex for a more complete list of information):

[5] Stephen Nathan, “The Politics of Privatized Immigration Detention,” presentation at the Graduate Institute for International and Development Studies, Geneva, 2 March 2010.