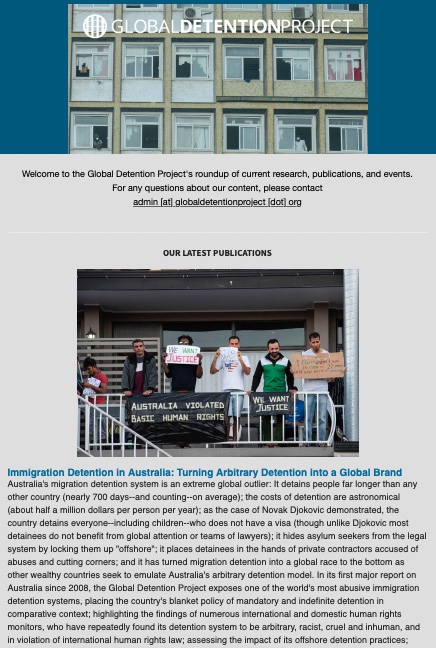 Welcome to the Global Detention Project’s roundup of current research, publications, and events. For any questions about our content, please contact us at admin (a) globaldetentionproject.org

Australia’s migration detention system is an extreme global outlier: It detains people far longer than any other country (nearly 700 days–and counting–on average); the costs of detention are astronomical (about half a million dollars per person per year); as the case of Novak Djokovic demonstrated, the country detains everyone–including children–who does not have a visa (though unlike Djokovic most detainees do not benefit from global attention or teams of lawyers); it hides asylum seekers from the legal system by locking them up “offshore”; it places detainees in the hands of private contractors accused of abuses and cutting corners; and it has turned migration detention into a global race to the bottom as other wealthy countries seek to emulate Australia’s arbitrary detention model. In its first major report on Australia since 2008, the Global Detention Project exposes one of the world’s most abusive immigration detention systems, placing the country’s blanket policy of mandatory and indefinite detention in comparative context; highlighting the findings of numerous international and domestic human rights monitors, who have repeatedly found its detention system to be arbitrary, racist, cruel and inhuman, and in violation of international human rights law; assessing the impact of its offshore detention practices; reporting on the dire conditions in many of Australia’s detention centres, which are frequently overcrowded, lack access to communal spaces and outdoor recreation, and are cut off from the outside world; and reviewing the disastrous consequences of this regime on the mental and physical health of detainees. Read the full report.

The MENA Rights Group and the Global Detention Project issued a joint report to the Human Rights Committee as part of the committee’s follow up procedure to its third periodic report on Lebanon’s implementation of the International Covenant on Civil and Political Rights. In the report we call on Lebanon to abide by its non-refoulement obligations, to protect refugees from push-backs at the border, to ensure that children are never detained, and to investigate reports of torture and ill-treatment in places of immigration detention. Read the full submission here.

GDP’s director, Michael Flynn, spoke at a webinar organised by a global network of migrant rights organisations on best approaches for building on Objective 13 of the Global Compact for Migration (GCM) on ensuring that immigration detention is used as a last resort and implementing alternative measures. The webinar is part of a free online certificate programme on the GCM that is aimed at focusing attention on emerging ideas and analyses since the adoption of the GCM in 2017, including the impact of the COVID pandemic and the regional reviews of the GCM that have taken place. For more information read here.

Immigration Detention in Turkey: Trapped at the Crossroad between Asia and Europe

Turkey has one of the world’s largest migration-related detention systems, operating more than two dozen removal centres with a capacity of nearly 16,000 in addition to ad hoc detention sites along its borders, airport transit zones, and police stations. A reluctant gatekeeper for refugees, asylum seekers, and migrants seeking to enter Europe, Turkey’s influential role has repeatedly been put on display, including in the wake of the Syrian refugee “crisis” in 2015, which culminated in the adoption of the controversial EU-Turkey refugee deal; and, more recently, after the 2021 Taliban takeover in Afghanistan, which spurred an exodus of Afghan refugees trying to reach Turkey. Turkey constructed a 295-kilometre wall and surveillance system along its border with Iran and has engaged in often violent pushbacks, detention, and deportation of Afghan refugees. Read report.

Morocco has long prided itself for defending the rights of migrants and asylum seekers, a reputation it sought to reprise when it took a leadership role in the negotiations over the Global Compact for Migration, adopted in Marrakech in 2018. However, this reputation has repeatedly been tarnished as criticism has grown over its treatment of asylum seekers, who can face severe obstacles in accessing protection procedures; as deep-seated xenophobia and anti-Black racism becomes evident in raids and mass forced removals targeting sub-Saharan migrants; and as the country’s long-awaited migration and asylum legal reforms continue to languish, nearly a decade after the Kingdom first announced its commitments to undertake them. In the meantime, increasing pressure from Europe to block the movement of migrants and asylum seekers is encouraging the use of enforcement tactics that violate migrants’ fundamental human rights. Read the full report here.

Authored by the GDP’s Izabella Majcher, Michael Flynn, and Mariette Grange, Immigration Detention in the European Union: In the Shadow of the “Crisis” offers a unique comparative assessment of the evolution of immigration detention systems in European Union member states since the onset of the “refugee crisis.” More information is available here.