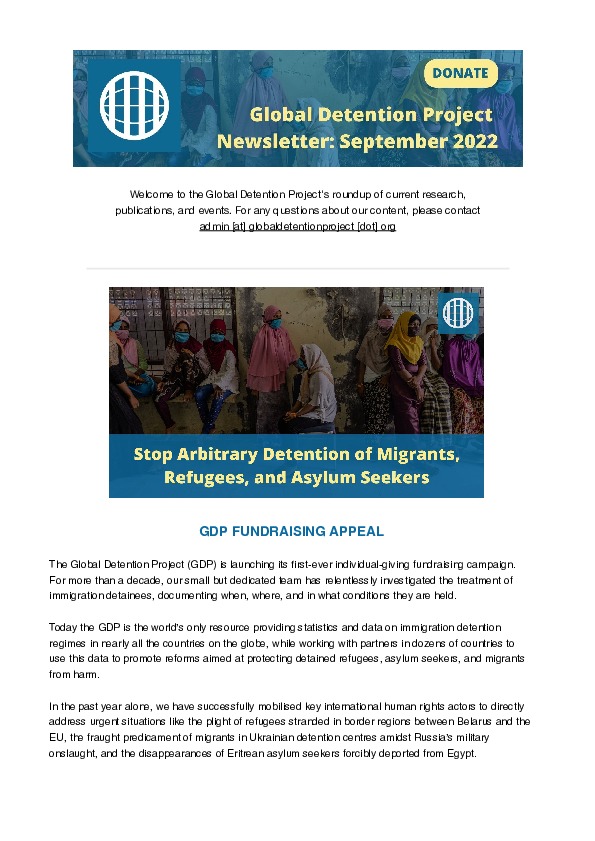 The Global Detention Project (GDP) is launching its first-ever individual-giving fundraising campaign. For more than a decade, our small but dedicated team has relentlessly investigated the treatment of immigration detainees, documenting when, where, and in what conditions they are held.

Today the GDP is the world’s only resource providing statistics and data on immigration detention regimes in nearly all the countries on the globe, while working with partners in dozens of countries to use this data to promote reforms aimed at protecting detained refugees, asylum seekers, and migrants from harm.

In the past year alone, we have successfully mobilised key international human rights actors to directly address urgent situations like the plight of refugees stranded in border regions between Belarus and the EU, the fraught predicament of migrants in Ukrainian detention centres amidst Russia’s military onslaught, and the disappearances of Eritrean asylum seekers forcibly deported from Egypt.

We’ve been able to make an impact because of the support we have received from a small group of dedicated institutional funders. However, the funding environment for our work is undergoing important changes, and so we are compelled to adapt how we finance our work and support collaborations with our partners. We are reaching out directly to our many friends, readers, supporters, and collaborators to ask for assistance at this critical moment.

Please donate to the GDP today … and help get the word out to like-minded people and institutions who share our vision of ensuring that children, trafficking victims, asylum seekers, and all at-risk people are never detained and that no one is arbitrarily and indefinitely kept in immigration detention.

Donations will support our efforts to:

Is There Convergence on Immigration Detention Between the Global Compact for Migration and the Migrant Workers Convention?

The GDP and IRRA Highlight Türkiye’s Treatment of Immigration Detainees

The GDP and our Istanbul-based partner the International Refugee Rights Association (IRRA) issued a joint submission regarding Türkiye’s treatment of immigration detainees to the UN Committee on Migrant Workers (CMW). We highlighted, inter alia, the failure of many of Türkiye’s immigration detention facilities to meet EU regulation standards; the confinement of at-risk groups including unaccompanied children and pregnant and nursing women; and the use of immigration detention procedures for people who are accused of being foreign terrorists. The IRRA also delivered a virtual presentation to the CMW on 20 September and responded to questions from Committee members about the treatment of asylum seekers and migrants in Türkiye. .

The Global Detention Project’s Executive Committee has unanimously elected Sahar Okhovat as its new President, replacing outgoing President Roberta Cecchetti. Sahar is a Senior Policy Officer at the Refugee Council of Australia and previously served as the Vice Chair of the detention committee for the Asia Pacific Refugee Rights Network and as a Humanitarian Observer for the Australian Red Cross, monitoring conditions in Australian onshore and offshore immigration detention facilities. The GDP is delighted to welcome such a dedicated and experienced advocate into this role and will benefit enormously from her immense expertise in immigration detention issues within Australia and beyond. Read more.

WHO: World Report on the Health of Refugees and Migrants

The World Health Organisation’s first ever report on refugee and migrant health, launched in July, brings together key evidence about the multitude of health challenges faced by refugees and migrants. Key to health considerations are the various impacts of immigration detention, with many cases of deaths, suicides, and cases of self-harm attributed to a failure to provide adequate health care and to poor detention conditions. The report’s chapter on immigration detention (pp. 66-68), which was drafted by the GDP’s Executive Director, explores this deeply concerning trend and highlights the various ways in which detention impacts health outcomes. Read more.

Reflecting on the GDP’s notable achievements in 2021 and our efforts to ensure that global tools have local impact, our Annual Report takes a look at key highlights such as the launching of our interactive webinar series introducing local activists to international human rights tools; working closely with civil society partners from every region of the world to bring attention to human rights violations faced by detained migrants and asylum seekers; and mobilising key actors in both regional and UN human rights systems to directly address urgent situations. Read the full report.