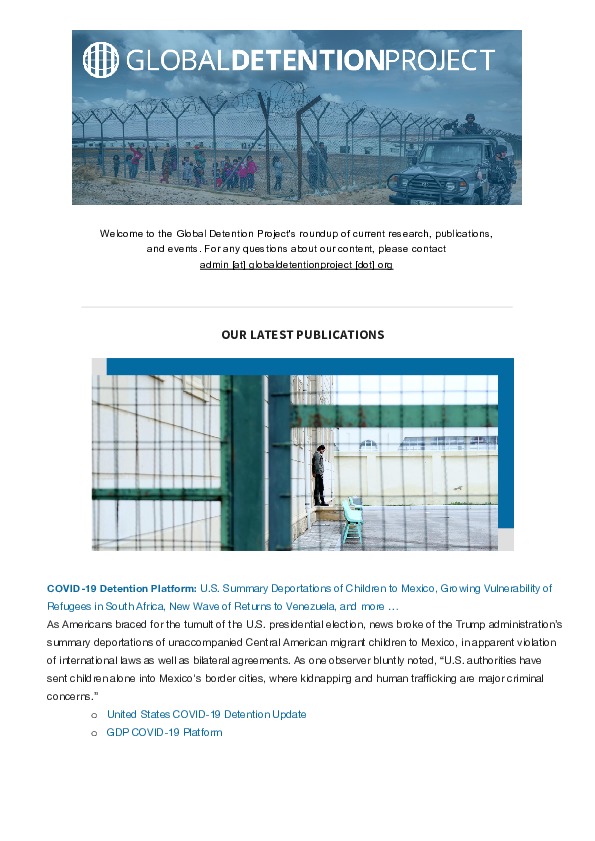 As Americans braced for the tumult of the U.S. presidential election, news broke of the Trump administration’s summary deportations of unaccompanied Central American migrant children to Mexico, in apparent violation of international laws as well as bilateral agreements. As one observer bluntly noted, “U.S. authorities have sent children alone into Mexico’s border cities, where kidnapping and human trafficking are major criminal concerns.”

Azerbaijan lauds its immigration detention centres, which opened less than a decade ago. But there are few independent reports detailing detention conditions and monitoring bodies such as the European Committee for the Prevention of Torture have yet to fully investigate this issue, despite allegations of abuse at detention centres. While there have been efforts to assist internally displaced people, there are long-standing concerns surrounding the treatment of refugees and asylum seekers, including accusations of refoulement and inadequate asylum procedures. After the onset of the COVID-19 pandemic, authorities reported implementing some protective measures, including temporarily halting the placement of people in immigration detention.

Submissions to the UPR and CEDAW: Singapore, Niger, Paraguay, and Morocco

In submissions to the Universal Periodic Review and the Committee on the Elimination of Discrimination against Women, the GDP highlights issues related to immigration detention in Singapore, Niger, Paraguay, and Morocco. Key points raised include Singapore’s treatment of migrant workers during Covid lockdowns, conditions in Niger’s and Paraguay’s quarantine facilities, and forced relocations in Morocco.

In early October, leaks reported in The Guardian revealed that the UK government had considered plans to send asylum seekers to offshore “processing” facilities in locations such as Moldova, Morocco, Papua New Guinea, and even Ascension Island and St Helena, using “the Australia model in Papua New Guinea and Nauru.” Reflecting on the long history of these types of proposals, the GDP’s director writes:  “Ultimately, what proposals like the UK’s novel ‘Pacific Solution’ reveal is the deeply seated nature of the wrong-headed idea that we can resolve the world’s many humanitarian and economic crises be removing from our view one of their more important harbingers—migrants and refugees. But as recent history has shown us, ‘out of sight’ does not mean ‘out of mind.’ While offshoring tactics may put the plight of desperate people outside our immediate awareness, there is no escaping the growing need of the world’s wealthy countries to address root problems in how we function as a global community.” Read the full article.

The GDP has joined more than 520 NGOs to urge human rights Treaty Bodies and the Office of the UN High Commissioner for Human Rights (OHCHR) to schedule State reviews no later than 2021 and to communicate clearly to civil society in advance about their up-coming work. While noting that the COVID-19 pandemic has created enormous challenges, the letter expresses concerns regarding the increasing backlog of reviews as well as the resultant protection gap due to the fact that Treaty Bodies have not been reviewing states. Read the letter.

Places of Quarantine as Places of “Detention”

In his statement to the 75th session of the UN General Assembly, Malcolm Evans, the outgoing chairperson of the Subcommittee on Prevention of Torture (SPT), addressed the critical relationship between quarantine and deprivation of liberty. “One particular issue that has arisen in some countries is whether places of quarantine are places of ‘detention’ for the purposes of the OPCAT.” Evans said. “Let me take this opportunity to answer this clearly: they are, and access cannot be denied to them.” Throughout the pandemic, the GDP has received increasing numbers of reports detailing the detention of non-nationals as a quarantine measure. In Bangladesh for example, more than 300 Rohingya refugees have been confined in prison-like facilities on the remote island of Bhasan Char as a quarantine measure since April. Read the Chairperson’s full statement.