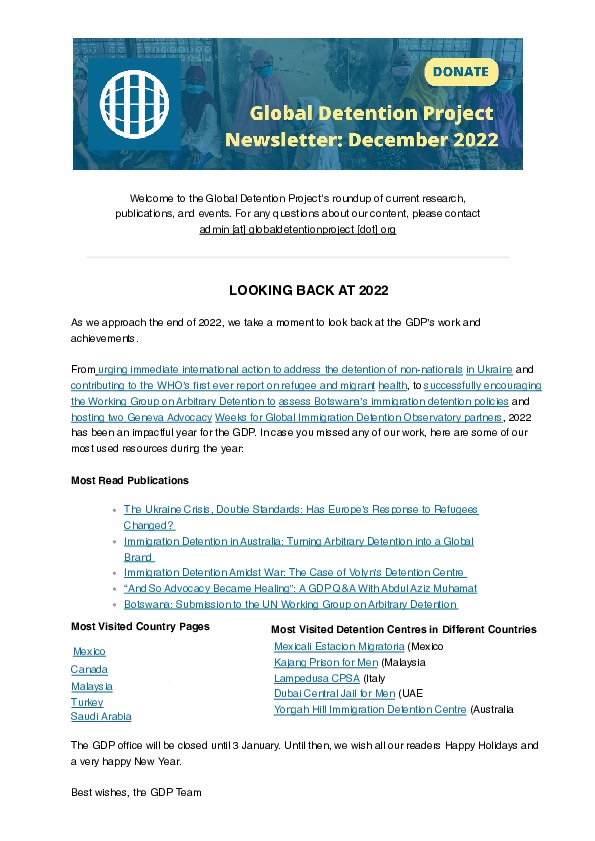 As we approach the end of 2022, we take a moment to look back at the GDP’s work and achievements.

From urging immediate international action to address the detention of non-nationals in Ukraine and contributing to the WHO’s first ever report on refugee and migrant health, to successfully encouraging the Working Group on Arbitrary Detention to assess Botswana’s immigration detention policies and hosting two Geneva Advocacy Weeks for Global Immigration Detention Observatory partners, 2022 has been an impactful year for the GDP. In case you missed any of our work, here are some of our most used resources during the year:

The GDP office will be closed until 3 January. Until then, we wish all our readers Happy Holidays and a very happy New Year.

The Ongoing Detention of Asylum Seekers in Ukraine

On 15 December, we raised the alarm after receiving concerning reports detailing the detention of 44 non-nationals in Ukraine’s Volyn Detention Centre (Volyn PTPI). Conditions in the facility are reported to be dire, prompting serious concerns for detainees’ safety and wellbeing. Amidst the ongoing suffering across Ukraine, it is crucial that the rights of refugees and asylum seekers caught up within the conflict are not overlooked. Ukraine must consider immediately releasing all foreign nationals who are being detained for immigration reasons, in particular in light of on-going warfare on its territory. The GDP also believes that it is incumbent on international and regional organisations to help detainees find safety in accordance with their mandates. Read more here.

A GDP Assessment of the Centre for Policy Studies’ Proposals for UK Detention Reform
“Stopping the Crossings: How Britain Can Take Back Control of its Immigration and Asylum System” (Centre for Policy Studies (CPS), 6 December 2022) is an unambiguous attempt to spur a “radical policy shift” to cut the number of irregular migrants arriving in the UK. Many of the report’s suggestions are directly relevant to the country’s detention policies–including the introduction of an Australian offshore regime, automatic detention of all “illegal” arrivals, and a massive increase in detention capacity. In this piece, the GDP takes a close look at Australia’s notorious immigration detention system to illustrate the realities of the CPS’ cruel and extreme proposals, highlighting the immense harm such policy changes would inflict. Read more here.

The GDP’s Transparency Initiative
As part of the GDP’s “Global Immigration Detention Observatory” project – whose central objective is to promote immigration detention reforms through rigorous research, data development, analysis, and reporting – the GDP and Observatory partners have submitted information requests to government agencies in southern Africa, the Gulf, Turkey, Thailand, and India in 2022. Requests have sought key information regarding countries’ detention practices, such as the number of non-nationals who are arrested and detained, information on the number of people who have been deported, and up-to-date lists of facilities currently in use for immigration detention purposes. To-date, the GDP has not received any responses to these requests. View the requests here.

The Global Immigration Detention Monitor
The GDP’s blog has recently reported on stepped up migration controls and forced expulsions in the Dominican Republic, the treatment of foreign migrant workers in the lead up to the FIFA World Cup in Qatar, the detention of Burmese nationals in southeast China, and the dangers faced by migrants in Zambia. Read the blog here.

The GDP has launched its first-ever individual-giving fundraising campaign. For more than a decade, our small but dedicated team has relentlessly investigated the treatment of immigration detainees, documenting when, where, and in what conditions they are held. Donations will support our efforts to end arbitrary and indefinite migration-related detention; ensure that children and other at-risk migrants, asylum seekers, and refugees are never detained; expose harmful detention practices; demand justice for people who have been unjustly detained; and promote the respect and dignity of all non-citizens. Donate now.

GDP On The Record